Red Mill, a 4.3% Best Bitter from the Reedham based Humpty Dumpty Brewery, has been named the top Norfolk brewed cask ale by the Campaign for Real Ale (CAMRA). 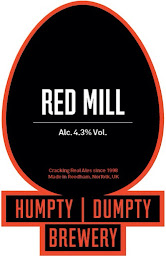 The beer is described in CAMRA’s Good Beer Guide as ‘Full bodied, robust and fruity.  Coffee, dark fruits and caramel vie for dominance against a malty bitter base.  Powerful rich ending.’

Humpty Dumpty also scooped second place with their Swallowtail, a 4.0% Bitter with a ‘marmalade and biscuit beginning enhanced by grainy bitter notes’.

A year long programme of tasting carried out by the Norfolk Taste Panel saw the winner emerge from a field of over 350 locally brewed beers.

Panel chair Alan Edwards commented: “As can be seen from the list of winners we have a lot of good breweries in Norfolk with thirteen, from all parts of the county, gaining awards. We hope these awards will encourage pubs to stock local brews and drinkers to seek them out.

“We need to do all we can to support local pubs and breweries.  The panel will now continue judging as we look forward to naming a winner in 2021”.

The scores are not only used to judge the Champion Beers of Norfolk, they also contribute to the selection of the East Anglian and Champion Beer of Britain (CBOB) competitions.

Posted by Adrian Hennessy at 13:59