Over 18,000 visitors made their way to The Halls in Norwich to celebrate the 40th year of the Norwich Beer Festival!

The February festival hopes to repeat the success of the 40th Norwich Beer Festival, where over 72,000 pints were enjoyed - from the cask ale, cider, perry, world beer and keg bars. Even wine and mead made an appearance.

From the generosity of the October festival public, the chosen local charity, Leeway, raised £7,070 towards its care for victims of domestic abuse.

Each year, drinkers at the October festival vote for their favourite beers, ciders and perries. If you’re looking for some inspiration for your Christmas party, or just want to know what to look out for over the festive season, take a look at the winners selected during the Norwich Beer Festival!

The overall winner and Beer of the Festival was Milk Worm by Three Blind Mice, as voted by the festival visitors. Second place was Norfolk Brewhouse with their Gold IPA and Thornbridge’s Lucaria was awarded third place.

Winner of the Mild category was Tombstone’s Stagecoach, People’s Ravingham Bitter won the Bitter round and Wildcraft Wild Bill won the Best Bitter round. Triple FFF was awarded the best Strong Bitter/IPA with their Hunky Dory, and Elmtree’s Terra Firma won Speciality Beer.

In the World/Foreign/British Keg competition, All Day won with their Cascadian Dark Lager.

The bar boasted one beer from every Trappist brewery in the world!  Cheryl has started to introduce aging of beers and Norwich were the first CAMRA beer festival (without brewery bars) that had a gluten-free beer on draught at all times.

It was a tight competition for the home brews, featured for the first time at Norwich Beer Festival. Announcing the winner of the Great Anglian Brew Off, as decided by public scores at the festival, the accolade went to Noman Stout, brewed by Elmtree Brewery in collaboration with Charles Abbott. Congratulations to Allan Cooper, brewer of Elmtree, and to Charles.

The averages of the scores for the three home brew beers, all created by members of the Anglian Craft Brewers Association, were all within half a point of each other, so congratulations to all finalists – including Mark Cade with Wildcraft Brewery for Wild Moonshadow and John Watson with Golden Triangle Brewery for Mosaical Cheers. In addition, Mark Cade’s Wild Moonshadow, was awarded second place in the Mild category. 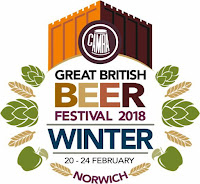 The organising committee of Norwich & Norfolk CAMRA are now turning their attention to the Great British Beer Festival Winter which will kick start on 1st February with a Fringe Festival around Norwich ale and cider pubs.

The Beer Festival itself will start from the 20th February in The Halls.

The festival, which offers beers of every season, shade and style, will then stay in Norwich for 2019 before moving to a different location.

It will have music nights on Thursday, Friday and Saturday.There is free entrance for CAMRA members to the festival, which will run from 20th to 24th February 2018.