A Beer Appreciation course has been hosted in Norwich for members of Norwich & Norfolk CAMRA.  The course is intended for members to attain the skills necessary to judge quality beers at local events and competitions and to enhance their own personal appreciation.

The Beer Appreciation course is recognised by CAMRA (the Campaign for Real Ale) and the training was hosted by Alan Edwards and held in The Beehive on Leopold Road, Norwich.  The course involved tasting 6 Norfolk beers and compiling tasting notes.

The course enables participants to judge local competitions and is particularly timely on the run up to the Champion Winter Beer of Britain competition which is due to be hosted in Norwich at The Halls on Tuesday, 19th February 2019 and will kick start the popular Great British Beer Festival Winter which will run until Saturday 23rd February 2019. 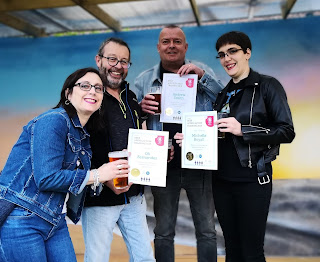 Alan Edwards, trainer, commented: “It is a busy year for Norwich & Norfolk CAMRA, with the annual Norwich Beer festival in October and the Great British Beer Festival Winter in February, both at The Halls. 2019 will be the last year Norwich will host this festival having reached the end of the 3-year term before it moves to a different CAMRA location.

“There are also many other CAMRA festivals in East Anglia and now is a good time to join in the activities and campaigns to protect local ale, cider, perries and of course pubs and clubs."

Norwich Beer Festival, which runs from Monday 22nd to Saturday 27th October 2018, will also be launching a new bar showcasing over 40 beers never before featured at the festival, with a limited supply of each beer, it promises to offer some interesting flavours and new delights to real ale lovers.

The Great British Beer Festival Winter will also be hosting a Fringe Festival in local pubs and venues, with beer tasting events and meet the brewer events planned from 1st February 2019.