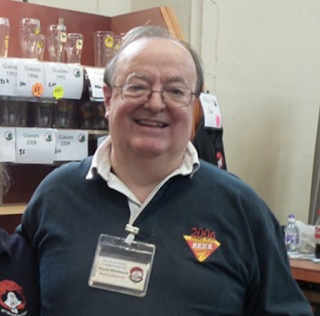 Aged 66, and originally from Polstead, in Essex, Warren lived in Norwich for many years and will probably be best remembered by many local drinkers as the person in charge of the products stall at Norwich Beer Festival.

With over 30 years membership of CAMRA, Warren was also previously the branch membership secretary, pubs officer, secretary and public affairs officer, where his administration skills were a useful asset.

Some may also recall Warren's leading role during the National CAMRA AGM & Members' Weekend held at St. Andrew's Hall in Norwich in April 2013.

Warren also enjoyed travelling, photography and trains and was an active member of the Norfolk Railway Society.

He was a keen promoter of pubs and had published a book on pub walks around Norwich, and will be remembered by several Suffolk CAMRA members as a regular competitor at the annual bowls matches played between Norfolk and Suffolk.

Posted by Adrian Hennessy at 17:50