Norfolk Cider and Perry is the Best in East Anglia

The other finalists were (in alphabetical order of maker):
Organic New Crop (Whisky Cask), made by Castlings Heath (Edwardstone, Suffolk)
Owld Norfolk, made by Crones Organic Cider (Kenninghall, Norfolk)
Orchard Cider, made by Greenwoods (Norwich, Norfolk)

The winning perry, for the second year in a row, was Whin Hill Perry, made by Whin Hill Cider (Wells-next-the-Sea, Norfolk).

The winning cider, Hog & Vine, from small cider maker Peter Blake, was described by judges as having "an aroma of a cornucopia of woodland fruits, a bit Christmas puddingesque. Flavoursome with lots of body, and a long lingering finish."

Some 10 years ago, Peter Blake and a group of friends thought it would be a good idea to make cider for personal consumption. Listening to the ‘buy and sell’ programme on Radio Norfolk one Saturday morning, they discovered some cider making equipment for sale, so duly purchased it.

The name, Hog and Vine comes from the old pig shed covered in vines that has been converted into a cider making shed. Peter Blake said "To say it was hard work is a massive understatement but we persevered and were pleasantly surprised with the results. Over the years we have progressed and modernised.

"I would like to thank all the people in the Martham area who kindly donate their apples, and to those who assist with the production." Peter added, "I am amazed and very proud that ‘Hog & Vine Original’ came out top against so many other excellent ciders."
Posted by Norwich CAMRA at 17:55 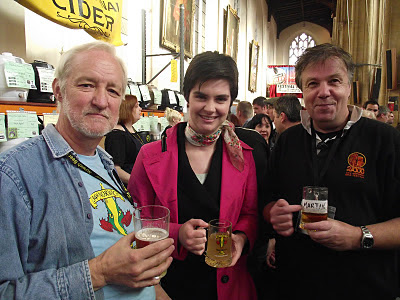 Martin Ward, the Festival Organiser, and Mike Spivey, the Branch Pubs Preservation Officer, accompanied by Mike Baldwin, Editor of the Branch Newsletter, Norfolk Nips, took the opportunity to explain to them how the festival was run and highlight some of the many issues facing local pubs and breweries today. 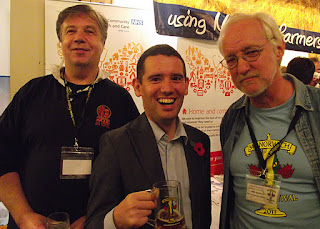 Martin Ward said that he was very pleased that they had both found the time to attend.

"It was a wonderful opportunity to meet them face to face," he said, "they were genuinely interested in our aims and objectives, which can only be good for the future.

"Today was all about building bridges," he added, "both Chloe Smith and Simon Wright (pictured above) now have a good understanding of the real ale, cider and perry scene in Norfolk and beyond and we look forward to a long and fruitful association with them."

Photographs by Mike Baldwin
Posted by Norwich CAMRA at 09:48