For the fourth year in a row the Grain Brewery from South Norfolk has been hailed as the brewers of the Champion Beer of Norfolk. 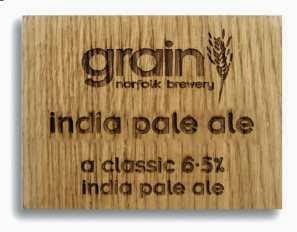 Described in the Good Beer Guide as “Powerful, complex, and rich with malt and hops vying with tropical fruit and bitterness for dominance”, the brew scored highest of the 50 brews tasted by the panel. It also claimed the Strong Bitter award.

Taste panel chair Alan Edwards explained “We are charged with tasting, recording, and commenting on as many beers as possible. Norfolk beers are our main priority but, with more than 30 Norfolk breweries, it is an awesome task. Over individual 500 taste cards were completed by the panel last year.

"More than 300 of them were for Norfolk brews with 50 beers, from 16 breweries, being covered. To emerge as the winner shows the true quality of the beer.”

Grain Brewery was launched in 2006 by Geoff Wright and Phil Halls at premises in Alburgh near Harleston. Selling cask and bottle conditioned beers, in 2010 it opened its first pub, The Plough in St Benedict’s Street, Norwich.

Attleborough based Wolf Brewery’s Golden Jackal won the Golden Ale category. The Speciality category was topped by Honey Ale from the Reepham based Panther Brewery.

Another Norwich brewery, Winter’s, takes the stout award for the third time in six years with its aptly named Geniuss.

The awards will be presented at the trade session of the 2014 Norwich Beer Festival in October.

Members of the Norwich & Norfolk branch of CAMRA (The Campaign for Real Ale) have selected The Fat Cat (West End Street, Norwich) as their 2014 City Pub of the Year and also the Branch’s overall Pub of the Year.

It is the fourth time that landlord Colin Keatley has been awarded the Norwich & Norfolk branch’s title and said he was “absolutely delighted”.

The Norwich & Norfolk Pub of the Year is chosen from the winners of the Branch’s Rural and City Pubs of the Year.

The 2014 Rural Pub of the Year was won by The Green Dragon in Church Street, Wymondham, which they also won in 2012.

The Fat Cat pub now goes into a head-to-head with the West Norfolk branch’s winner, The Coach and Horses in Dersingham, and also Mid Anglia’s winning pub, if that pub is in South
Norfolk, with the victor progressing to the Regional level of the competition.

Voting for the Pub of the Year awards was extended to an online facility for the first time for members, in addition to during the Branch meeting held in February, and also used CAMRA’s National Beer Scoring System (NBSS) for the first time which helped to double the numbers of members voting. The system encourages the scoring of pubs and real ale all year round judging for quality on a scale between 0-5.

"The Fat Cat is always a very popular pub with real ale drinkers, having won CAMRA National Pub of the Year twice in recent years (1998 and 2004). I wish The Fat Cat luck in the future rounds of the competition.  The Green Dragon, situated in the historic market town of Wymondham, is a very atmospheric pub”.

The Norwich & Norfolk CAMRA Branch have also awarded the 2014 Cider Pub of the Year, won for the third time by The White Lion, Oak Street, Norwich.

Ben Ackers, landlord of the Milton Brewery pub, said "It's wonderful to win any award three years in a row, especially in a city with so many great pubs.

"In the last couple of years it has been fantastic to see more pubs trying out cider and perry, particularly in terms of stocking local cider, giving customers the opportunity to try something new and local.

"Our staff do an excellent job keeping up with all the weird and wonderful products we are sourcing, meaning our customers can always be recommended something new and exciting.  I hear last year's apple crop was very good and I'm sure many pubs will take advantage of this; I know we will be!".

The White Lion now goes up against The Railway Arms in Downham Market which was West Norfolk’s winner, and also  the Banham Barrel, Mid-Anglia’s cider pub of the year in the vote to find the overall Norfolk Cider Pub of the Year.
Posted by Norwich CAMRA at 11:06