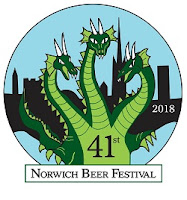 At 5.30pm on Monday 22 October, the Norwich Beer Festival will open the doors to its 41st festival at The Halls and will be unveiling its Curiosity Bar, new for 2018.

For the first time ever, a new and unique Curiosity Bar is being introduced to Norwich Beer Festival.  Featuring a personally-selected variety of over 40 British Cask ales that will stretch your thinking and palate.  Open throughout the Festival, but with only one cask of each, be quick to grab a favourite, as they say ‘if you snooze, you lose!’.

Gavin Cooper, Curiosity Bar Manager, commented ‘We have been travelling the breadth of England, working with brewers and wholesalers to bring you some of the most interesting and unique flavours, to stretch your perceptions of the British ale! We promise some very interesting flavours and styles.’

Within the Curiosity Bar selection are brand-new ales, Limited Edition ales and some that are very rarely served from Cask, giving them a unique and distinctive flavour.

Highlights to expect are barrel-aged versions of classic beers, sour beers, fruit beers, smoked beers, triple IPAs and barley wines.  You will find all the classics of the style spectrum, but with diverse flavours to complement their usual profiles.

Talk to the team, test their knowledge and try some great ales - but remember, with only one cask available, you need to visit us frequently throughout the week to sample the full selection! Visit the Curiosity Bar to find out more.

Here’s a little tour of what else you can expect to find at Norwich Beer Festival this year:

Do you like beer?
Not sure whether you like beer? Pop along to the World Beer Bar – the Bar Manager there, Cheryl Cade, loves a challenge and will do her best to find you a beer you will like.  There are also soft drinks, including fruit juices, at the World Beer Bar and fizzy drinks and water available at all bars – just ask the staff. Or, give the cider and perry stand a try, which sometimes has wines and meads on too.

Would you like to give ciders a try?
The selection of real ciders and perries has grown year on year, as the appeal for ciders has grown in recent years, with drinkers preferring a wide selection of flavours and styles.  This year the festival will offer 80 different varieties, mostly from East Anglia.

What’s at the World Beer Bar?
Cheryl Cade, World Bar Beer Manager has two special breweries in the marquee - Fort Lapin from Bruges and Fantome from Soy in the Ardennes.  Neither have shipped their beers to a UK beer festival before.

Fort Lapin’s will feature their fruit and brune beers, with soft raisins and hibiscus flowers. Fantome will offer their Saison, a sparkling delight, soft and refreshing. The other 2 beers will surprise, one is a new version of a beer brewed before and each has a wild yeast element.

The World Beer Bar are also showcasing beers from Val Dieu, the last true Abbey brewery in Belgium.  With a mix of bottled and keg, the bar will have something from their entire range. ‘There will be at least one tap running their beers at all times’, promises Cheryl.

So, what other beers can you expect to find?

Norwich Festival has evolved from 20 odd beers served on small tables in Blackfrairs Hall in 1977 to over 220 cask-conditioned real ales!  ‘We simply can’t get any more beers in’ commented Craig Harmer, Beer Festival Organiser.

As well as the usual pale ales, golden, red, IPAs, bitters, porters and stouts, there is also a range of speciality beers, which tend not to fit into any one category.

A couple of the local speciality beers include Red Queen, a red ale with dark berries then lingering bitterness; Forager's Ale, a strong brown bitter with Parasol mushrooms and green hops from the brewer’s own garden (only seven firkins made!); Sugar Ray with a hint of honey; Chocolate Nutter with peanuts and strong chocolate flavours; Vanilla Latte, a rather nice coffee and vanilla milk stout; and Tundra a white IPA, sweet with hints of fruit and lemongrass.

What’s on and what’s not?

To keep track of the beers and ciders on offer during the festival, you can view the online beer listing, updated as they change.  You can find the list on the Norwich & Norfolk CAMRA website.  You can also register and login to create your beer list and score the beers!

You can also vote for your favourite festival beers using the voting form in the programme and the results should be announced at the end of the week before the festival finishes on Saturday.  The programme is available for free at the festival.

Cash admissions will be available on the door at every session – from £1 to £5 - and only £3 all day on Saturday.  CAMRA members have free entry all week or you can join at the festival for free entrance and some free beer!  Beer card tokens can be purchased at the glasses stand and remaining beer tokens may be cashed-in or donated to Headway, Norfolk and Waveney’s brain injury charity. 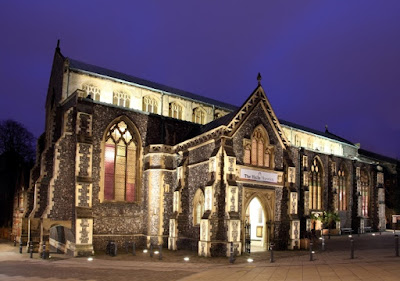 At 5.30pm on Monday October 22nd, the Norwich Beer Festival will open the doors to its 41st festival at The Halls.

For a small entrance fee (or join CAMRA for free entrance), visitors can enjoy more real ale than is ever in one place in Norwich, world beers including Trappist and fruit beers, ciders, plus live entertainment.

‘Exploding with delight’ to open the festival are blues and funk band, DC Wilson.  The festival simply wouldn’t be the same without some brass, so also playing on the opening evening are Cawston Brass Band.

For those who love a bit of prog rock and Floyd, late Wednesday, see Geneva play, together with folk and originals band The Punch House.

‘There's 106 miles to Chicago, we've got a full tank of gas, half a pack of cigarettes, it's dark out, and we're wearing sunglasses’ rocking Norwich Beer Fest’ Thursday early evening are ABC Blues Brothers followed by the popular Lovin’ Handful, bringing some well-known Bluegrass and Americana.

Friday night is party night! The Harvs will be warming up with their fun collection of ‘music from everywhere and everywhen’ followed by The Good Times party, disco music to get everyone movin’.

For only £1 on the door, lunchtime audiences will be entertained by rock ‘n’ roll (with some blues and country), funky bluegrass and some blues-rock.

See the full line-up of music on our website.

Craig Harmer, Festival Organiser, explained Saturday is a good day to visit the festival as it’s open all day from midday, with last entrance at 9pm and is not too busy so you can usually just walk straight in at any time.

The festival is attended every year by tens of thousands and each year numbers grow.  Some people have commented that the festival is so successful it attracts long queues.  To this Martin Ward, committee member, replied: ‘Gone are the days of waiting for a long time in a queue.  We now have a fast-track queue system and everyone is surprised how quickly they enter the Halls and are able to purchase their glass and tokens, even on the busier Thursday and Friday.’

The 2018 charity of the Norwich & Norfolk CAMRA Branch is Headway, Norfolk and Waveney’s brain injury charity.  Brain injury can affect anyone.  Headway supports people with traumatic and acquired brain injury including strokes, their families and carers to regain confidence and overcome challenges. They promote independence and rehabilitation, providing information and support services directly to those in need.  The charity will be collecting cash or beer tokens at the festival.

Cash admissions will be available on the door at every session.  As always, CAMRA members have free entry all week with the presentation of a valid membership card.  Free beer and entrance refunds will be given to anyone purchasing new membership at the festival.

Free entrance to CAMRA members will also be extended to the week of the Great British Beer Festival Winter at the Halls from February 19th to 23rd 2019.  The February Festival, which offers beers of every season, shade and style, will be moving to a different CAMRA region from 2020, since the festival moves every three years.

The Great British Beer Festival Winter will also be hosting a Fringe Festival in local pubs and venues, with beer tasting and meet the brewer events planned from 1 February 2019.  For more information visit winter.gbbf.org.uk. 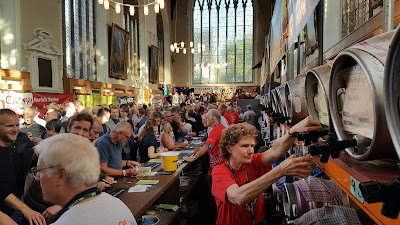