The Beehive on Leopold Road, in Norwich, has been voted the overall Pub of the Year in Norfolk for 2015 by members of the Norwich & Norfolk, West Norfolk and Mid-Anglia branches of CAMRA (The Campaign for Real Ale).

The Beehive Pub was recently crowned overall Pub of the Year by the Norwich & Norfolk Branch and was the first time that landlady Alex Kerridge has been awarded the prestigious title (she is pictured below with her branch awards). 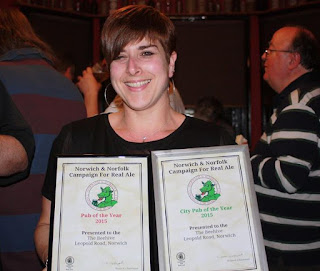 Ms Kerridge said: “To win Norwich City Pub of the Year, the Overall winner and now to be awarded Norfolk Pub of the Year is just overwhelming! Community pubs are invaluable, which is why I have worked so hard in growing The Beehive into the hub of the community, as well as offering an excellent range of local beers while supporting other micro-breweries from further afield.”

The Beehive beat the West Norfolk branch’s winner, The Coach and Horses in Dersingham, and also Mid Anglia’s winner The Queen’s Head, Earsham, in South Norfolk.

Martin Ward, the Norfolk Area Organiser, commented: “Many congratulations go to Alex and her team at the Beehive. With a strong emphasis on the quality of the beers and the community focus of the pub, The Beehive emerged the winner after a well fought contest between the other two Norfolk pubs in the competition. A deserved winner.”

Martin also said: “The Beehive will now progress to the East Anglian Regional level of the competition and will be up against pubs in Bedfordshire (Black Lion, Leighton Buzzard), Cambridgeshire (King of the Belgians, Hartford), Essex (Victoria Inn, Colchester), Hertfordshire (Orange Tree, Baldock) and Suffolk (White Horse, Sweffling).  The competition deadline is set for the beginning of August”.

Ms Kerridge will be presented with The Beehive’s Norfolk Pub of the Year certificate in the near future.
Posted by Norwich CAMRA at 12:42 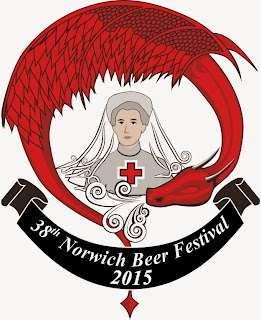 The Norwich & Norfolk Campaign for Real Ale (CAMRA) are delighted to announce the winning entry in the logo competition the 2015 Norwich Beer Festival which depicts Norfolk heroine Edith Cavell in the very heart of the stunning design.

A large number of entrants to the annual competition were carefully considered and debated before the winner was chosen by the branch members at a recent Festival Planning meeting.

As always, the beer festival logo is widely used to promote the festival on souvenir glasses, pin badges and clothing and the local branch members appreciate how important an attractive yet unique design is appreciated by the thousands of visitors to the Norwich Beer Festival, one of the largest CAMRA Beer Festivals in the country.

The designer and artist is Charlotte Hogbin, who is 21 and from Norwich, and is studying at the School of Oriental and African Studies in London and who has a passion for painting to unwind.

Liz Hogbin, on behalf of the group of Registered Nurses, said: “We chose to honour Nurse Edith Cavell in this, the centenary year of her death, and we are absolutely thrilled at this news and so pleased at the recognition and celebration of the life of Edith Cavell that this will bring.

"The design for the logo was entirely Charlotte’s creation and she decided that Edith had to be at the centre of the design, but the dragon should represent peace and protection around her to mirror her work and actions during World War I”.

Liz continued: “We are a small team of senior nurses and matrons who honour the life and work of Edith Cavell by, for example, regularly attending the memorial service held for her each year and by helping to tend her grave at Norwich Cathedral”.  This is the first time any of the group or Charlotte have entered the annual logo competition.

Rob Derbridge, Norwich Beer Festival Organiser, said the design was particularly striking and well balanced with the red dragon, which is the only design requirement given to entrants, surrounding the image of Edith Cavell.

The group wins £100, complimentary tickets to the festival and also a selection of merchandise including the glass featuring their logo.

Preparations have already started for the festival which will aim to provide an exceptional range of refreshments as ever.  Over 200 cask-conditioned Real Ales from Britain's independent brewers will be on sale, with a few festival specials as always, along with draught and bottled beers from Continental Europe and over 40 real ciders and perries.

For the first time the Festival will boast two qualified beer sommeliers, Cheryl and Mark Cade from Norwich, who have recently passed their exams and will assist festival goers in selecting beers and will help run the popular tasting sessions.
Posted by Norwich CAMRA at 12:46