Norfolk Nips is CAMRA magazine of the year 2020 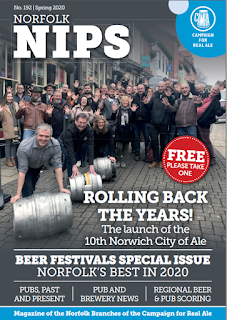 Norwich & District CAMRA are delighted to announce that Norfolk Nips, the branch magazine of the Norfolk branches of CAMRA, has been named Magazine of the Year in the annual national CAMRA magazine awards. It also came second in the Most Improved category, a real credit to the changes we've made since the start of last year.

Congratulations to the Editor, Lucy Cousins, who took over just over a year ago, said: "Since joining as editor, my aim has been to make Norfolk Nips engaging and relevant to all pub goers in Norfolk (and beyond) with great visual appeal and excellent written content.

"These awards are fantastic recognition of how far we've come and a perfect springboard to make Norfolk Nips even better!

"So, here's a big Thank You to all our regular contributors, advertisers and everyone else who has helped with Norfolk Nips over the past year!"

The awards are open to all 200+ CAMRA branches in the UK, with entries judged by a panel, and the winners usually announced at the Members Weekend & AGM in early April. Even though there's no awards event this year, we're still hoping to celebrate this fantastic win as soon as the pubs reopen!

Norfolk Nips is created by hard-working CAMRA volunteers, published by Shilling Lane Media, and funded through advertising from pubs, breweries and other local businesses. Around 12,000 copies are distributed to pubs across Norfolk four times a year by volunteers, but can also be downloaded from our website, or read online at Issu.com

Current and previous issues of Norfolk Nips can be found here.

Posted by Adrian Hennessy at 15:39