Forty four entries were received from twelve of Norfolk’s 30-plus breweries for the Norwich and Norfolk branch of the Campaign for Real Ale’s (CAMRA) Bottled Beer competition for 2012.

The winners were revealed on 24th January at The Cottage pub on Silver Road, Norwich, at the presentation evening attended by many branch members, along with numerous representatives of the local breweries.

The Beers of the Festival awards for the 2012 Norwich Beer Festival were also presented during the evening.

Alan Edwards, the Tasting Panel chair, said “We tasted a ride range of ales, proving that Norfolk brewers can live with the best. The variety of styles had something for everyone and all were well presented. 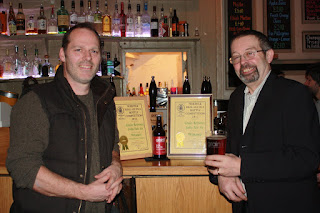 The overall winner in the blind tastings was Grain Brewery’s IPA. The 6.5% traditional Indian Pale Ale is described as ‘Amber coloured with a rich fruity aroma; a complex mix of flavours finds malt mixing with a dark marmalade background enhanced by hoppy overtones.’

The overall runner-up was Beeston’s Brewery’s named The Squirrels Nuts. The 3.5% Mild described as ‘A bouquet of roast coffee grains and cherries introduces this fulsome red brown ale; a well balanced blend of malt, roast and caramel is given contrast by a gentle hazelnut hoppiness.’ 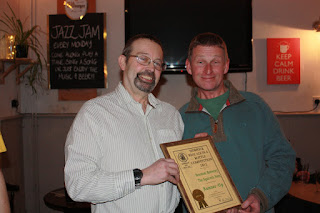 Alan continued “Grain Brewery, one of our smaller breweries, can consider themselves worthy Champions. It took a lot of hard tasting before the winners emerged. N&N CAMRA hope to run the competition again in 2013 and hope that more of the county’s brewers will enter.”

Runner Up and Mild winner: Beeston Brewery - The Squirrels Nuts 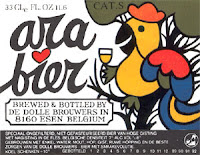 In December, Annie and I made the arduous trip to Belgium to visit friends, sample some beer and do some Christmas shopping.

While we were over there, we made the trip to De Dolle Brouwers at Esen in West Flanders, to pick up some Stille Nacht (12% blonde Christmas beer) and to present them with the certificate for Foreign Beer of the 2012 Norwich Beer Festival for Arabier.

We also had the chance to sample a version of the 2010 Stille Nacht that had been maturing in oak for 25 months - superb.

The brewery was originally started by 3 brothers, one of whom, Kris Herteleer, is still at the helm.  He opens the brewery for tastings and sales only at weekends and claims that it is a hobby that got out of hand.

His 95 year old mother leads the brewery tours every Sunday and says that her health and long life are due to drinking a bottle of Arabier a day.  You can't argue with that!