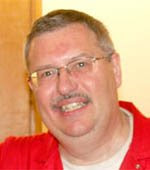 This year's branch Annual General Meeting saw considerable changes to the make-up of the committee.

Our new Chairman is Graham Freeman (pictured), who has served as secretary for the last few years. He replaces Des O'Brien, who leaves the committee after several years at the helm.

Graham is also continuing in his position as Branch Contact.

The Vice-Chair post remains in the hands of Martin Ward, who also continues as organiser of the Norwich Beer Festival.

Our new Secretary is Carolyn Jones, who has been on the committee for several years.

Tim MacDonald continues as our Social Secretary, organising meetings and trips through the year.

The Pubs Officer role continues in the hands of Warren Wordsworth, who also co-ordinates surveys for the Good Beer Guide, amongst other duties.

Dave Cleverley continues to support Warren in the role of Deputy Pubs Officer and we welcome four new members to the committee this year: Martin Hicks, Antony Miles, Helen Miles and Mark Stimpson.

There are also several un-elected branch positions, answering to the committee:

Production of our branch newsletter, "Norfolk Nips" (which amalgamated with West Norfolk Branch's "Cask Force" this year), remains in the hands of editor Andrea Kirkby.

And the Beer Tasting Panel is co-ordinated by Alan Edwards. 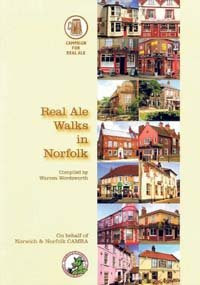 The Norwich and Norfolk Campaign For Real Ale is proud to launch "Real Ale Walks in Norfolk" at the Forum, Norwich, on Wednesday 8th April 2009 from 9am to 5pm.

Real Ale Walks is 128 page book that has been several years in the making, with support from branch members across the county. It documents the history of not just the pubs and
quality ales sold, but many interesting facets of local history surrounding these fine establishments.

Warren Wordsworth, Branch Pubs Officer and compiler of the guide, started out with a few ideas in late 2003. Eventually producing six walks centred around Norwich for sale as a information pack of leaflets at the 27th Norwich Beer festival in 2004.

Warrent commented: "These were quite well received by festival attendees, and encouraged myself to enlarge the project to cover more of Norfolk". With support from the branch committee, a draft was produced in 2007, but by that time, many of the walks had be revised to account for changes in the industry.

Newly elected Branch Chair, Graham Freeman comments that "Warren has done a superb job with the book, and hopes that this will encourage people to get out and about to visit not only their local, but travel slightly further afield to visit some of Norfolk's fascinating pubs and enjoy a good pint".

The book is produced in full colour, with many photographs of the pubs themselves, local landmarks, and comes with extensive notes about the buildings, their history and ranges of
beers.

The book is now on sale in Jarrolds Book Dept, Norwich, priced at £5.99.

We are staging the official launch of this book at The Forum (Norwich Library) this coming Wednesday, 8th April, 9am-5pm. If you are in central Norwich on Wednesday please drop in and pay us a visit where you will be made very welcome.