January 2nd saw the official launch of our Winter LocAle Trail 2012 at the Wig & Pen, in Norwich – one of the 31 pubs taking part in the trail.

The aim of the trail is twofold: firstly to encourage beer drinkers to visit pubs that they would not normally visit during the winter month and secondly to promote CAMRA's LocAle Scheme and locally brewed real ale of which there is an abundance of breweries in Norfolk! There will also be an opportunity to vote for your favourite “Pub of the Trail”.

CAMRA’s LocAle is a national initiative that promotes pubs that sell locally brewed real ale. LocAle is also about reducing the amount of beer miles that the beer travels between brewery and pub.

All the pubs on the trail have joined our LocAle scheme which means that at least one real ale – brewed within 30 miles of the pub – is on sale at all times.

Each trail pub will stamp a trail card for each pint of LocAle purchased (or soft drink for a designated driver) and can be collected in any order.

Completed trail cards can be exchanged for a free ale trail t-shirt as well as being entered into a prize draw. Prizes include brewery tours, local beer and even a chance to be a day as a Head Brewer!

There's information about the trail on our website and there's also a Google Map to help guide you to the pubs. 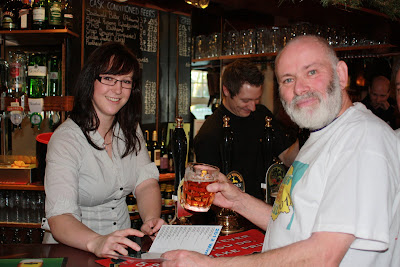 Peter Wells, one of the trail organisers, receives his first stamp from the Wig & Pen's general manager Holly Thomas. 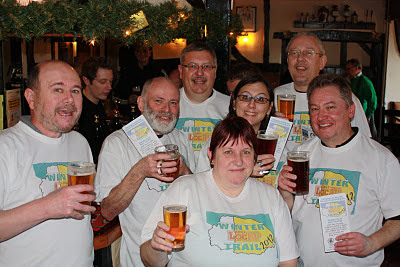 The trail organisers and other CAMRA members celebrating the start of the Winter LocAle Trail 2012.
Posted by Norwich CAMRA at 10:10