The Leopard, Norwich, is Branch Pub of the Year 2019

Congratulations to Bob Utting, Michelle Elden and their team on winning the overall Norwich & Norfolk CAMRA Branch Pub of the Year for 2019!

The Leopard is a fantastic community pub, which has been totally transformed since Bob bought it from Bateman's back in 2014. 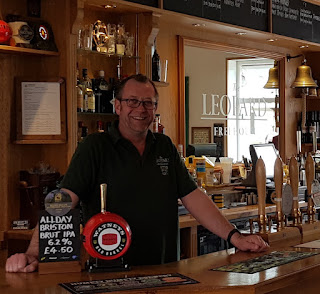 A complete interior and exterior renovation changed a somewhat run-down back-street boozer into a light and bright, friendly pub, with something for everyone - a great range of real ales and ciders, of course, mostly from local breweries, but also quality keg beers, including a changing craft keg beer run through an old Watney's font! The Leopard is also our City Pub of the Year.

The award will be presented at the pub on Friday April 12th at around 8pm - please join us to celebrate!

Branch Rural Pub of the Year 2019 goes to the Green Dragon at Wymondham.

The Green Dragon has regained its crown as Rural Pub of the Year. An ancient inn, dating back to the 14th century, in the shadow of Wymondham's famous Abbey, the pub features a great range of five mostly local real ales, as well as excellent food and two fantastic beer festivals every year, in May and August, offering over 60 different beers.

The White Lion, Norwich, is Branch Cider Pub of the Year 2019.

A many-times winner of this accolade, the White Lion continues to be the best cider and perry pub in the city, although, partly thanks to others following the trail it has blazed over the past seven years, it won't be able to rest on its laurels! Congratulations to Russell Corke for the win - new landlord Oscar Gerdes now takes the pub into the next round.

First ever Branch Club of the Year 2019 won by the Bob Carter Leisure Centre, Drayton.

In a close-run competition, judged by our Clubs Officer and a small judging panel, the Bob Carter Centre came out as the very first Branch Club of the Year. The club, a short walk from the centre of Drayton, allows entry to card-carrying CAMRA members, and has up to six excellent local ales available. Congratulations to the management on their win!

Congratulations to the runners-up in all categories, who in every case were only fractions of a point away from the winner!

Second place in the overall Branch Pub of the Year, and City Pub of the Year, was taken by a previous winner, the Kings Head, in Magdalen St, Norwich. With a rapidly changing list of up to a dozen real ales, many local but also from selected breweries around the country, the Kings Head is no stranger to real ale lovers in the area!

The Norfolk Lurcher, formerly the Ugly Bug Inn, at Colton, and last year's winner, was the runner up in the Rural Pub of the Year, with a selection of excellent-value local real ales, and great food.

The Cider Pub of the Year runner-up was the Vine, where Aey stocks a good range of real ciders alongside three or four real ales.

And last but not least, the runner-up in the Club of the Year is the Haig Club, which is a focal point of Mundesley’s social scene, attracting members of all ages who can enjoy live bands, darts, snooker, sea views and, of course, excellent ales!