Norwich Door to Door is our Branch Charity for 2010 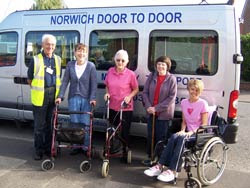 At a recent branch committee meeting, the Norwich and Norfolk Branch of CAMRA selected Norwich Door to Door as its nominated charity for 2010.

An interesting debate and lengthy voting process was necessary because there were so many worthy charities applying, and each one had a compelling and convincing case to make, but it was felt that as Norwich Door to Door was serving the local community it got the nod this year.

This admirable organisation’s objective is to enable social inclusion for severely disabled children, disabled adults and older mobility impaired people who are on low income and find they are unable to use mainstream transport or the volunteer car schemes.

It aims to provide social inclusion for people whose disabilities curtail their independence and access by providing transport to enable them to make their own contribution to their area.

The committee are confident that CAMRA members who visit this year's Norwich Beer Festival, as well as other visitors and guests, will again donate as generously as ever to this local and admirable cause.

For more information on ‘Norwich Door to Door’ see www.norwichdoortodoor.org.uk
Posted by Norwich CAMRA at 11:38

Larling Angel is the Norfolk Pub Of The Year 2010

CAMRA (the Campaign for Real Ale) are delighted to announce that The Angel Inn, at Larling, has been voted Norfolk Pub of the Year for 2010.

In a very close contest the Angel was judged to be the best.

Congratulations go to Andrew Stammers, of the Angel, who said he was absolutely overwhelmed with his success and would like to thank his staff, customers and CAMRA for their support.

Andrea Briars (Regional Director for CAMRA East Anglia) said: "This year's competition again showcased two thriving pubs: a town local and a village pub at the heart of its community.

"Well done to both for reaching this stage of the competition and I wish Andrew Stammers and the team at the Angel well in the next round."