Rural Pub of the Year 2012 Presentation

The presentation of the Norwich & Norfolk branch of CAMRA’s (Campaign for Real Ale) award for 2012 Rural Pub of the Year to the Green Dragon, Wymondham took place on 12th June.

The certificate was presented by Graham Freeman, N&N CAMRA Chairman to the joint licensees, David Bear and Justin Harvey (pictured below). 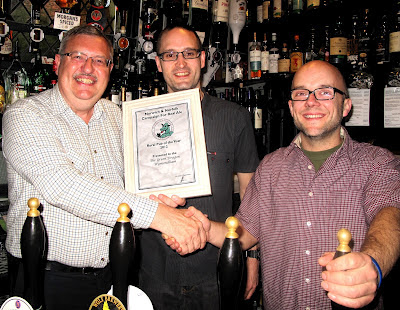 David and Justin have only been in the pub for eighteen months and are delighted with receiving the Norwich & Norfolk CAMRA award.

They have also been nominated for South Norfolk District Council 'Community Pub of the Year' which they are hoping to do well in and they said “it would be wonderful if we could win that award as well”.

The Catfield Crown crowned Pub of the Winter LocAle Trail

Out of the 31 pubs that took part in the 2012 Winter LocAle Trail, The Crown in Catfield, east Norfolk can claim the accolade of “Pub of the Trail”.

The Winter Ale Trail was organised by the Norwich and Norfolk branch of the Campaign for Real Ale (CAMRA) to encourage beer drinkers to visit pubs that they would not normally visit during the winter month, as well as to support CAMRA's LocAle Scheme which promotes locally brewed real ale.

Graham Freeman, the branch chairman of Norwich and Norfolk branch of CAMRA, said: “During the dark months, the CAMRA Winter LocAle Trail was a beacon to the 31 participating pubs. Many people visited the pubs for the first time and hopefully they will return again.

"The landlords and drinkers certainly enjoyed the experience. We successfully promoted local beers and local pubs which is something to look forward to when the next trail comes along”.

The well attended presentation evening took place on May 29th at the Crown when Graham Freeman presented the certificate to The Crown’s landlady and landlord Pauline and Nando Sappia.

Mr Sappia, who is still making the pub’s lasagne to his mother's secret recipe despite the fact that they have a new chef, said: “This has come as a complete surprise but we are delighted to receive this accolade”. He added: “The increase in footfall and sales was very welcome in the winter months”.

The Winter Trail proved a very popular challenge, with participants able to claim stamps from the pubs over a 3 month period.

Mr Ralph Myton, from East Dereham, commented: “A group of four of us travelled around the pubs, many we hadn’t visited before, and we thoroughly enjoyed our outings. I am delighted the Crown in Catfield won as I voted for them and we would definitely do the trail again”.

He was also very pleased to receive some brewery beer towels in the post after the prize draw, as well as his Winter LocAle Trail T-shirt which he was proudly wearing at the City of Ale Brewers Market at the Forum.

Well done to all those who took part, wear your Winter LocAle Trail T-shirts with pride and see you next time!
Posted by Norwich CAMRA at 12:18

The Norwich & Norfolk branch of the Campaign for Real Ale (CAMRA) will be organising the biggest pub crawl of the year later this month, in their annual quest to prove that Norwich is the UK Capital of Real Ale – but this year they’re looking for help to beat off a head-to-head challenge from the city of York, which is running a similar survey on the same day, Saturday 30th June.

Norwich was first declared Capital of Real Ale last year, after volunteers visited over 130 pubs on the same day, and discovered a grand total of 215 different real ales on sale.

Since then Sheffield, Derby and Nottingham have all tried to claim the title, but the challenge from York may turn out to be the stiffest one yet, as the city has a similar number of pubs per head of population as Norwich.

“We expected a big number, but 215 was massive, and as we all had a great time surveying the pubs, we thought we’d do it again this year!” said Ian Stamp, N&N CAMRA’s Pubs Officer.

“Norwich has a great pub scene, as we’re seeing this week with the City of Ale, and we need to keep shouting about it to get the national attention our brewers and landlords deserve”.

“Helping with the survey is easy” Ian says, “You don’t need to commit to anything more than visiting a pub sometime during the day of the survey on the 30th June”.

And there’s even the chance to win a few bottles of beer if your guess is one of the nearest to the final total of real ales found on the day – which will be announced the same day – in one of the pubs, naturally!

Anyone who would like to help can email pubsofficer@norwichcamra.org.uk for details.
Posted by Norwich CAMRA at 12:47