The cheque presentation of the donation of £1,144.61 from sales of the Edith Cavell real ale was made by Rob Derbridge, 38th Norwich Beer Festival Organiser on behalf of the Norwich & Norfolk branch of CAMRA (Campaign for Real Ale) to Cavell Nurses’ Trust on 21st February.

Steven Moralee, Head of Trusts and Major Gifts at Cavell Nurses’ Trust, visited Wolf Brewery, Norfolk who brew Edith Cavell to receive the cheque and Steve said “We are extremely grateful to the Norfolk & Norwich CAMRA Branch for their donation from the sales of Edith Cavell ale at the 2015 Norwich beer festival.  The fact that the beer also came second in the Bitter category at the festival is a fantastic way to celebrate the life of this heroic nurse and support nurses who are facing hardship today.”

The annual beer festival was held in St Andrew’s and Blackfriars’ Halls in Norwich during the week commencing Monday 26th October 2015 and proved very popular again with around 19,000 festival attendees coming through the door during the eleven sessions with 576 pints of Wolf Brewery's Edith Cavell ale being drunk over the week.

Rob Derbridge said “Because 2015 was the 100th anniversary of nurse Edith Cavell's death, and also with our festival logo featuring Edith this year, we thought it was a great idea to help raise funds for the charity in Edith's name and support this charity.  We would like to thank the public for their support and our wonderful volunteers for raising awareness throughout the week”.

Preparations for the 39th Norwich Beer Festival, which will take place from Monday the 24th October 2016, have already started including holding the first round of the logo competition.  Further details of the festival will be announced in due course and, in the meantime, local companies interested in sponsorship opportunities at the Norwich Beer Festival can get in touch with the organisers now. 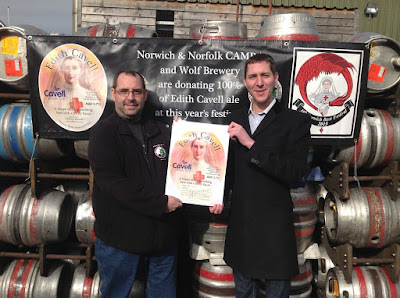 Posted by Adrian Hennessy at 15:39

The Fat Cat Brewery Tap on Lawson Road in Norwich has been voted as best pub in the city for 2016 by the members of the Norwich and Norfolk branch of CAMRA (Campaign for Real Ale), as well as the 2016 Branch’s overall Pub of the Year.

It is the first time that Landlords Mark White and Laura Hedley-White has been awarded the Norwich & Norfolk branch’s prestigious title and when told the good news Mark said “Laura and I are so proud that our pub has been chosen to be Norwich and Norfolk CAMRA Pub of the year 2016.  Not only have we got amazing staff that run the pub as their own, but also brilliant customers that have supported us throughout the last 5 years.

"Our aim has always been simple; seek out the best and most innovative beers the UK has to offer, then, serve them in the most fun environment we can create. We would like to thank all those at Norwich and Norfolk CAMRA for their support and CAMRA members for voting for us.  We really are so chuffed!”.

The Norwich & Norfolk Pub of the Year is chosen from the winners of the Branch’s Rural and City Pubs of the Year.  The 2016 Rural Pub of the Year was won for the first time by The White Horse in Neatishead.

The Landlord, Ricky Malt said “In just under two years since we have opened, this is our proudest moment.  We think we have shown that you can be different and still be successful.  This is what we have dreamed of and are thankful to all our loyal customers”.

The fact that there are two new winners for 2016 shows the strength in depth of good pubs in Norfolk.  The runner-up in the rural competition was The Star in Lessingham and in the city Pub of the Year, second place was the big sister to the Fat Cat Tap, The Fat Cat on West End Street who have won the National CAMRA Pub of the Year twice before, and third was the King's Head on Magdalen Street.

The Fat Cat Brewery Tap now goes into a head-to-head with the West Norfolk branch’s winner, The Kings Arms in Shouldham, who have also won the top accolade for the first time this year, and possibly Mid Anglia’s winner if that is a pub in South Norfolk, with the victor progressing to the Regional level of the competition.

Ian Stamp, Pubs Officer for the Norwich and Norfolk Branch, said “It's great to have two first-time winners of our Pub of the Year competition, and both are cracking pubs!  Mark and Laura at the Fat Cat Tap show how a back-street local can shine in the right hands, with a huge range of real ales, ciders, foreign and 'craft' keg beers, plus regular live bands, an annual beer festival and superb cheese-boards.

"Ricky at the White Horse has taken a quiet village pub, on the verge of closure, and, following a doubtless expensive and sensitive renovation, turned it into a destination venue not just for locals, tourists and diners, with friendly staff and excellent meals, but also for beer drinkers, and a range of real ales and other craft beers which far surpasses expectations.

"Congratulations to both pubs and I wish The Fat Cat Tap luck in the future rounds of the competition!”.

The winners will be presented with their award certificates at the respective pubs in the near future.

Posted by Adrian Hennessy at 20:11