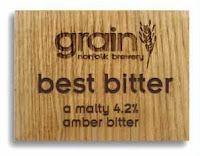 Grain Best Bitter has been named the Champion Beer of Norfolk 2011 by the Norwich and Norfolk branch of the Campaign for Real Ale.

The 4.2% Best Bitter described as ‘A well balanced, full bodied beer with a rich malty aroma’ has emerged victorious from a year long programme of beer tasting conducted by the Norfolk Taste Panel.

The beer is brewed by the Grain Brewery from Alburgh, near Harleston. The brewery also claimed the Speciality Beer category with their Blonde Ash wheat beer.

Taste panel chair Alan Edwards explained, “We are charged with tasting, recording, and commenting on as many beers as possible. Norfolk beers are our main priority but with over 30 Norfolk breweries it is an awesome task.

"Almost 500 taste cards were completed last year. Almost half of them were for Norfolk brews with 41 beers from 15 breweries being covered. To emerge as the winner shows the true quality of the beer.”

The brewery was launched in 2006 by Geoff Wright and Phil Halls at premises in Alburgh, near Harleston. Selling cask and bottle conditioned beers, in 2010 it opened its first pub, the Plough in St. Benedicts Street, Norwich.

Five local breweries are award winners. The Norwich based Fat Cat Brewery claim a trio of awards with its Bitter, Cougar and Porter winning their respective categories.

Attleborough based Wolf Brewery’s Golden Jackal is the winner of the Golden Ale category for the third year in a row.

Dark Fantastic, the award winning mild from the Tharston based Spectrum Brewery is both vegan and organically certified.

Another Norwich brewery, Winters, takes the stout award for the second time in three years with its aptly named Genius.

The awards will be presented at the Trade Session of the Norwich Beer Festival in October.