Winter’s Mild, a traditional Norfolk style brew, has been named as the county’s top beer by the Campaign for Real Ale (CAMRA).

The beer is brewed in Norwich by David Winter who runs his small Winter’s Brewery single handed.

Alan Edwards, chairman of the Norfolk Taste Panel, explained: “The members of the panel were united in their enthusiasm for this beer and their scores reflected this.

“Comments included: ‘An excellent example of a classic British mild’, ‘a strong flavoured full bodied mild’, and ‘classic nutty mild with lashings of roast softened by a sweet hoppy dryness’.”

Although mild ales suffer from am image problem this shouldn’t stop anyone trying them. This beer has something for everyone, a range of flavours that will please most discerning drinkers.”

David Winter was delighted at the news and said: “This is tremendous news and will give the brewery a substantial boost.”

The champion mild, along with the other class winners listed below, will now go forward to the Champion Beer of East Anglia finals.

These will be held later in the year and pit the Norfolk winners against their counterparts from Suffolk, Essex, Cambridgeshire, Hertfordshire, and Bedfordshire.

Alan Edwards added: “This is a good example of a beer from a brewery that produces quality products but does not have the exposure it deserves.

"Norfolk has around 30 breweries; all of which struggle to find outlets for their beers as the number of pubs declines and those remaining are often tied to deals with the major brewers.

He continued: "We need to seek out and buy our locally brewed beers just as much as we need to ensure the survival of our local pubs. What could be greener than drinking local beer in a local pub?”

Norfolk Pub Of The Year announced

The Norwich & Norfolk and West Norfolk branches of the Campaign For Real Ale are proud to announce that the Norfolk pub of the year is the Artichoke, at Broome.

It's difficult running a pub in these testing times, with pub closures happening nearly every day round the country. However to be crowned Norfolk pub pub of the year has to be some achievement, but to John Craft it's the second time around for him.

After successfully running the King's Arms, in Hall Road, Norwich, for a number of years, John now is the landlord at the Artichoke, in Broome, and just gone and done it again.

After a closely fought contest between the Union Jack at Roydon (near King's Lynn), the Artichoke emerged as the winner.

John Craft, upon hearing the news, was very surprised: "I didn't think in a million years that I would get so far in the competition".

Graham Freeman, N&N CAMRA branch chairman, was delighted: "It only goes to show that if you run a pub well, get the basics right, good beer, excellent hospitality, the pub will thrive, especially in these tough economic times".

Andrea Briers, Competition Organiser, offered her congratulations to John: "Both pubs in this year's competition are excellent examples of thriving village pubs serving the local community, which gave a closely contested competition.

"For any pub to get this far is quite an achievement, I wish them well in the next stage of the competition".

The Artichoke, will now go on to feature in the next phase, where it will go up against other county winners from the likes of Suffolk, Essex, Cambridgeshire, Bedfordshire and others around the region.

The pub is open from 12-11 (not Mon), and is situated just off the A143 on the old Yarmouth road that runs through the village. 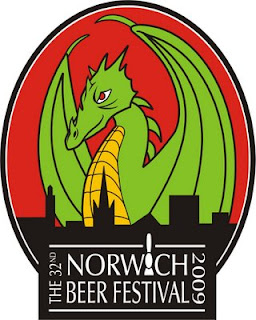 Norwich & Norfolk Campaign For Real Ale unveil the winning logo for the 32nd Norwich Beer Festival. As usual the entries were of a universally high standard.

With a large number of entries to choose from, the judging process went on slightly longer than it usually does as members debated the merits of the designs. Eventually, after whittling the entries down to a final three, Paul Minns' design of a dragon overlooking the Norwich skyline came through.

Paul, who lives in Norwich, was astounded after hearing that he had won the competition, "I spent a lot of hours over the Christmas holiday, drawing and re-drawing, trying different colour combinations. To be honest, I never thought that I could win: this is the first time I have entered the competition".

Martin Ward, Festival Organiser, commented, "I think this is an excellent design, with a dragon that seems to be protecting the city from adversaries". He further said "It highlights both elegance and simplicity, and I'm sure it will be popular with our customers".

Paul will receive a winner's cheque for £100, plus a selection of festival merchandise for his efforts and is very much looking forward to the event.

Although planning is at an early stage, as in previous years, we aim to provide an exceptional range of quality real ales and ciders from not only Norfolk, but other outstanding breweries around the country.

For further information about the festival, please see our web page at http://www.norwichcamra.org.uk/festival/festival.htm