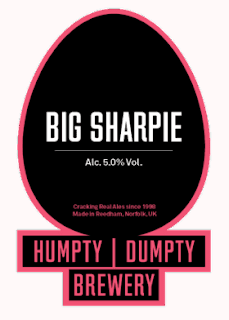 It’s double top for the Humpty Dumpty Brewery, of Reedham, as their ‘Big Sharpie’, a 5.0% Premium Pale Ale, has been named the Champion Cask Ale of Norfolk 2022 by the Norfolk branches of CAMRA (Campaign for Real Ale).

This follows on from the same brewery winning the 2022 Champion Bottled Beer award with their ‘Little Sharpie, a 3.8% Session Pale Ale.

Big Sharpie was described by the judges ‘Crisp hoppiness dominates the aroma and taste. Countered by peaches, malt and a slowly growing bitterness a grainy lingering finish develops.’ Brewed every 100th brew the beer uses plenty of Magnum, Cascade and Citra hops to develop the full hop experience.

Norfolk beers are judged by the Norfolk CAMRA Tasting Panel over a twelve-month period. Panel chair Alan Edwards commented: ‘The panel taste as many Norfolk brews as possible, though are sometimes limited by the availability of the beers. The list of winners shows the depth and quality of Norfolk brewing as well as the skills of our local landlords in presenting the beers.’

Second place overall went to Sirius Dog Star, a 4.4% Red Ale described as ‘A rich tapestry of malt, roast and caramel with interwoven hop hints. Sweetness and bitterness provide a light but growing undercurrent.’ It is brewed by the Wolf Brewery, of Besthorpe.

In third place was Vanilla Latte, a 4.6% Speciality Ale with coffee, vanilla and lactose notes, from Mr Winter’s Brewery, of Norwich.

Alan Edwards added: ‘The award winners have been judged the best but there are many more equally fine brews waiting to be discovered. The onus is on the public to seek out and experience the variety of styles, with their own unique flavours, and brewed in Norfolk.’

Eight of the 40-plus Norfolk breweries are represented in the awards. CAMRA hopes they will encourage landlords to stock these, and the many other fine brews available from local breweries plus giving customers the incentive to seek out and support their local pubs.

The Norfolk panel is always looking for new members. If you would like to join us, please e-mail tastingpanel@norwich.camra.org.uk. The greater the number of people contributing to tastings, the more breweries have the chance to win.